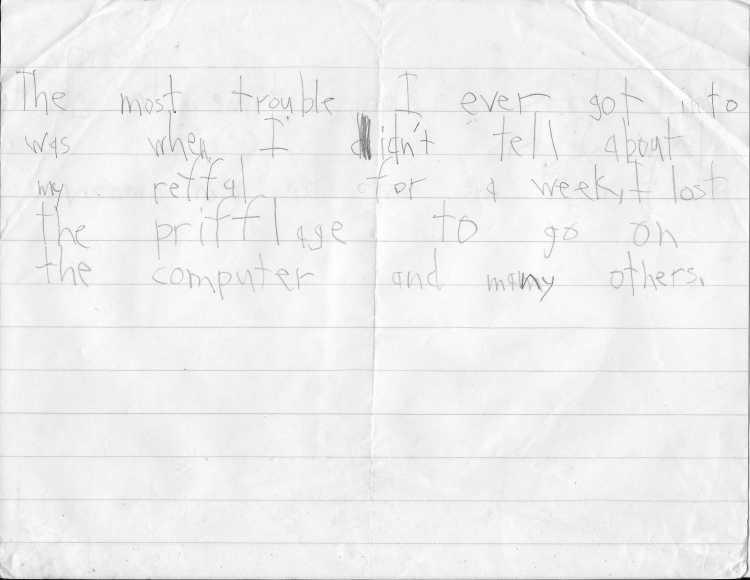 So when I was in the first or second grade, I attempted multiple times to forge my mother’s signature. The reason I did this was because I was given a referral. Referrals at my elementary school were not a good thing. It was basically a referral to go talk to the principal. For some reason, I had done something so wrong as a youngling that I was given a god damn motherfucking referral. Fuck me, I didn’t even fucking know how to cunting curse yet, but look at me now! GIVE ME A REFERRAL NOW, TEACHER!

When you got a referral you had to get your parents to sign it, in order to show that they saw it. Makes sense! Sorta. Still don’t know what the fuck I did that was warranting a referral.

Apparently, this counts as a full blown fucking rock in the eyes of San Bernardino school administrators, so I got the referral for it because said asshole went and told our teacher what had happened.

Yeah, I forged the shit out of my mom’s signature because I didn’t want anyone to know at home. Didn’t even feel guilty about it. I casually asked her how to spell her name and then wrote that out like I was writing it in her cursive handwriting. Unfortunately, it was the scrawl of a second grader. I think that’s what got me caught, in the end.

I knew my priorities, though. Tell that fucking teacher what she did to me and the misery of not having a week of computer privileges. I was super into Call of Duty 2, so yeah that was a big blow to me and my lifestyle.

Worst trouble I’ve ever gotten into to this day, I think. God dammit. Fucking tag was never so savage.

Concerned with memory, currency, and destiny, I strive to capture each one as they happen. Join me and consume reality! Radio Reality. City! View more posts

This site uses Akismet to reduce spam. Learn how your comment data is processed.